Learn how Regina’s addiction to cocaine and heroin derailed her life and how treatment helped her gain her freedom back. Regina is a former client and current counselor at Starlite Recovery Center. 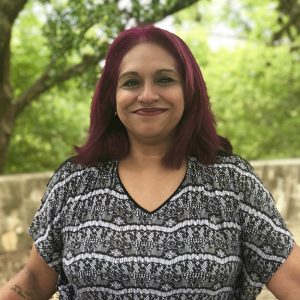 I am overwhelmed with gratitude that I actually get to come to work and help others that reach out like I did almost 5 years ago. Starlite gave me hope when I had none, it gave me freedom when I felt suffocated in my disease. Most of all, it gave me a brand new life and the tools to deal in a healthy way, and not run to drugs and alcohol to numb any little thing I didn’t want to face.

I had been “dabbling” in substances since the age of 12, whether it was alcohol, marijuana, or eventually, illicit drugs. I discovered amphetamines at the age of 15 and was full-blown addicted by the age of 16. I would use anything and everything, mostly cocaine and speed. I had my first overdose on my 18th birthday, and the only thing I remember is getting yelled at by the ER nurses that this was going to be my last birthday. That didn’t even scare me. I was able to go for a bit without using drugs, but I would still drink – secretly – or so I thought. As an alcoholic and addict in recovery, I realize that nothing was ever done secretly. My next foray took me into the world of prescription medication. I took whatever I thought I needed to numb myself so that I wouldn’t have to feel anything. That worked for years, but then I found a new love – heroin. It was cheaper and I could sink into oblivion and not have to worry about a thing. I didn’t start my IV use until my mother passed away suddenly in 2010. At that point, I just didn’t want to deal with her death or my life. On the night of her funeral, I finally told my significant other that I wanted him to teach me how to use the needle, so he did it for me. After that, if I couldn’t put it in a needle, I didn’t want it. We were shooting cocaine and heroin daily, multiple times a day, he overdosed one night at home, next day we were back at it. This was a daily for me for the next 3 years, even when he went to prison, it was still daily for me. I still maintained a professional job, my children were fed and clothed, so I truly believed I did not have a problem. I was the definition of a functioning addict (or so I thought).

It was in November of 2013 that my family caught on to me and staged an intervention. I had the option to go to treatment and get help, or get cut off from any help or contact from them. I chose to get help. I arrived at Starlite on 11/18/13, broken and defeated. I slept for the first 3 days and isolated- I didn’t want to be here. “I didn’t have a problem.” After I completed my 7 days in detox, I was going to groups and classes but still didn’t believe I was an alcoholic or addict. One night, I couldn’t sleep, so I cracked open the Big Book of Alcoholics Anonymous and started reading the stories in the back. I realized that almost every single story was about me, I cried while I finished that entire book in one night. The next day, I surrendered. The thought came to me that, if I would do anything for drugs and alcohol, then why wouldn’t I do anything to save my own life? Starlite gave me the tools I needed to start my journey, and I started paying real attention. I started participating, and before I knew it – I had accepted the fact that I was an alcoholic and a drug addict and I didn’t want to live like that anymore. I took all suggestions and did what I was told to do. When I left Starlite, I continued going to meetings, I worked with a sponsor, and I started working with other women in the program. I still find it hard to believe that I get to come home to where my new life began each and every day and help others who are just like me. In November, I will celebrate 5 years of continuous sobriety and I couldn’t have done it without all of the people that helped me at the beginning of my journey here at Starlite. I am grateful that Starlite exists, and that people like me get to start their new lives here and will make an impact on others when they leave here and begin their new lives.