Learn about Pat’s remarkable journey to recovery following over a decade of drug and alcohol abuse. Pat is a Utilization Management Coordinator and alumni at Starlite Recovery Center. 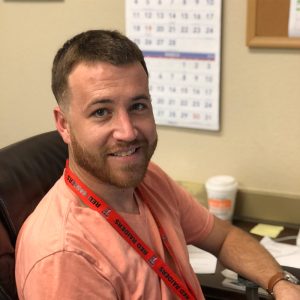 If you would have told me as a child that I would grow up to be a drug addict, I would have thought you were crazy. I was afforded every opportunity a child could ask for, and then some. I came from a very loving family where every want and need was fulfilled. Unfortunately, all the love in the world was not enough to deter me from living a life of self-destruction for over a decade. I was very active in sports and successful in school from a very young age and would be the last person you would expect to become a full-blown heroin addict. When I was 15 years old, I smoked weed for the first time and immediately fell in love. Around that time, I was also introduced to alcohol, and once again, fell in love. At that time, drinking and smoking weed became the most important thing in my life. My grades got progressively worse as did my relationships. Throughout high school, I experimented with various drugs and I can look back now and see that, even at that young age, the way I drank and used was far from normal. I managed to graduate high school and went to college at Texas Tech University. After arriving to college and experiencing no parental supervision or accountability of any kind for the first time in my life, my drinking and using became considerably worse. I failed my first semester and got my first DWI all within 10 days of each other.

My third year of school is when everything changed. I was introduced to OxyContin and life as I had known it was over. I can sit here and confidently say that I was addicted from the very first time I did it. Within six months, I had to move home because I was unable to function as a normal person and was convinced that a change of scenery was what I needed. Upon moving home, I was reintegrated with old friends who were doing the same thing I had been doing and this is when I began using heroin intravenously.

The next year and a half of my life was something I would not wish on my worst enemy. I woke up every morning with one goal in mind and was willing to do whatever I had to in order to achieve that goal. I managed to graduate from college in 2010 and within a few months of graduating I had a near fatal overdose that landed me in ICU. Once again, I was convinced that all I needed to fix me was a change of scenery. I moved to San Antonio and began working and in a very short period of time was doing the exact same thing.

As I now know, the disease of addiction is progressive in nature and this is where my progression really took off. I was doing any and every drug I could do and further alienating myself from my friends and family. My parents finally realized they were on their way to loving me to death, and told me that I could go to treatment or I could leave their house. I chose to leave their house, and within 2 months I had gotten my second felony drug charge and was looking at doing some time in jail. I went to a state-funded treatment center and was shooting heroin within a week of being discharged. I would wake up and tell myself today is the day that I am not going to use and then I would inevitably use.

My parents approached me about going to Starlite, and I finally took their offer. I admitted to Starlite on July 27, 2015 and was an absolute shell of my former self. On my second day of treatment, I had my problem explained in detail to me for the first time in my life. Up until that point, it was pretty obvious that I was a drug addict, but I had no idea what that meant. I was taught the solution. I was told that, if I did a few certain things, my life would get better. I was very hopeful because hope was all I had. People from surrounding areas would come out and talk about how good their lives were getting and I would cling onto that. I was still was not convinced that it was going to work for me, but I really had no other option. I was given a simple and straight forward way to live life on life’s terms, and I am grateful for that.

My life has been completely transformed. I no longer think about using drugs, nor do I think about not using drugs. I simply live my life, and for someone like me, that is nothing short of a miracle. I genuinely like what I see in the mirror for the first time in over a decade. My relationship with my family is better than I ever thought possible, and I am able to be a productive member of society. I am able and willing to be helpful to other people today. I have the opportunity to work at Starlite in an office that is no more than 40 feet from the room I recovered in as a client. If I am having a bad day, it really puts into perspective the problems I have now, compared to the problems I had when I arrived here for treatment. The things I learned at Starlite allowed me to recreate my life and, for the first time since I can remember, be genuinely happy. To be employed by the place that taught me a new way to live is a blessing that I am reminded of daily.