Learn how Michelle’s addiction to cocaine and heroin derailed her life and how treatment helped her gain her freedom back. Michelle is a former client and current counselor at Starlite Recovery Center. 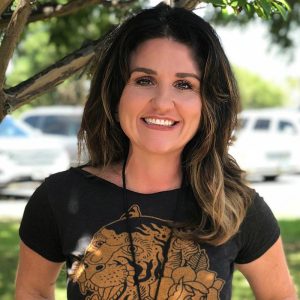 I was the type of person who looked like I knew exactly what I was doing and where I was going. To everyone else, it looked like I had it together. I had friends. I was in school and a good student. The truth is, nothing was coming together. I was a chameleon. I did whatever was needed to get people’s approval. There was something inside me that cried out “I’m not enough.”  When I turned 19 years old, I went off to college and started drinking and smoking weed.  I finally found something that made me not care what others thought and to me, feeling nothing was a much better option than feeling everything.

It wasn’t long before my casual drug and alcohol use progressed to IV cocaine and heroin use. When I used, my life was no longer my own. I quickly changed from a trustworthy friend, daughter, and granddaughter to a convicted felon with three DWIs, a possession charge, and several theft charges against me. Even incarceration was not incentive enough to get me to stop using. Because of my unwillingness to surrender to the fact that I was an addict and inability to accept the help that so many people offered and prayed I would take, I left prison and within three short weeks of release, I went right back to shooting dope. I was dying – and I was scared. I knew I could no longer live the way I was living. I was on felony probation and there was no way I would be able to pass the mandatory drug test. Failing a drug test meant I would forfeit my probation and I was looking at going back to prison for a number of years. Not city jail. Not county lock up. Prison. I caught a break and instead of prison, I was able to go to treatment.

There is something special about Starlite Recovery Center. To me, it feels like there is something spiritual that has touched this campus – almost as if a halo is surrounding it, protecting it and all the clients who come here. It was the only place where I didn’t count the days before I left. In treatment, I was finally ready to do what I was told to do and use the tools I was given. I learned to trust the process, no matter what. When I finally surrendered, I was free! Not only did I begin to start living again, but I was completely unprepared for the truly amazing life that I was before me. I’ve been clean since September 1, 2010. I am living proof that there is NOTHING that using won’t make worse.

Because of the gift of recovery, I am a better mother, granddaughter, daughter, wife, and friend than I ever could have been before September 1, 2010. I have a home group. I work the Steps. I pray. I am of service to others. I sponsor other women, and I have a sponsor myself. Today, the person I am on the outside matches the person I am on the inside. And I’ve never been happier.